Filipina OFW Has Been Missing for 10 Months, Found Dead in Abu Dhabi – DOLE

The Department of Labor and Employment (DOLE) announced on Monday, February 1, the death of a Filipina receptionist based in Abu Dhabi, Mary Anne Daynolo.

ALSO READ: Why is Abu Dhabi a Good Alternative to Dubai for Overseas Pinoy Workers?

Daynolo, as per authorities, has been missing for more than 10 months in Abu Dhabi. The investigation into the case has also been hampered due to the restrictions imposed for the control of the coronavirus. 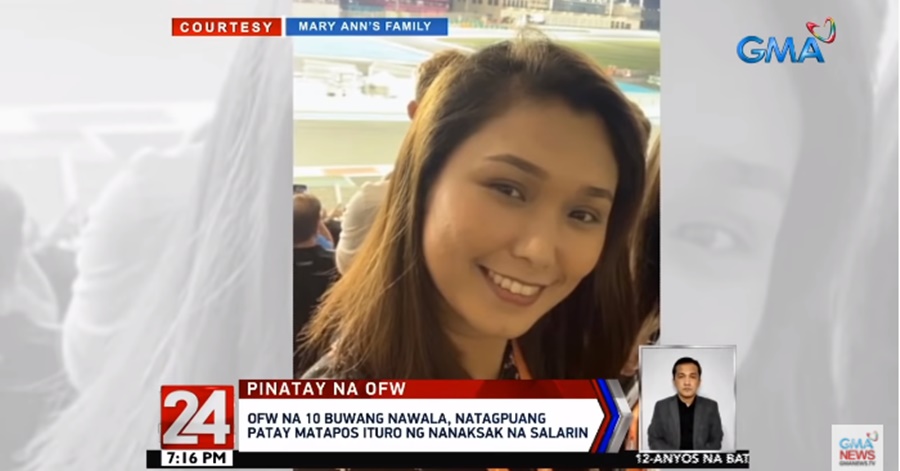 Screengrab of a video posted by GMA News Online/YouTube

According to labor secretary Silvestre Bello III, Daynolo’s body has been identified by Abu Dhabi authorities only last month. They also noted that the body has already gone through the advanced stage of decomposition, the Philippine News Agency reported.

The self-confessed suspect, a Ugandan national identified as “Paul” came forward and admitted to the crime and led the Abu Dhabi Police as to the location where Daynolo’s body was buried.

Authorities found Daynolo’s body already in “advanced stage of decomposition” in one of the areas of the hotel late last month.

Bello also revealed that the body, which bore a fatal knife wound in the neck, was repatriated over the weekend.

Meanwhile, Bello reassured the public that Daynolo’s family will be provided with death and burial benefits from OWWA.

“If she has children, they will get educational scholarships too,” he added.

Bello added that Daynolo would also probably receive insurance benefits from the employer that was supposed to have her covered by insurance.

Otherwise, she will get insurance compensation from the agency that recruited or employed her, he explained.

Meanwhile, the government is still looking for two more suspects involved in the case.

Bello noted that Abu Dhabi authorities said the main suspect, was with two unidentified ‘accomplices’ when the crime took place.

“While the alleged killer is already behind bars, two other suspects remain at large. They should also be caught and brought to justice. Justice should be served for what they did to our beloved OFW,” Bello said.

Here is the video report posted by GMA News Online/YouTube:

READ NEXT: 6 Reasons Why You Should NOT Work As An OFW

Previous post: How to Apply for a Freelancer License in Abu Dhabi