Driving on the road requires full concentration; otherwise, we might experience something as scary as the video shared by Abu Dhabi Police recently on their social media platforms.

The video shows a horrific crash between two cars, brought about by distracted driving. The footage is part of a road safety campaign by Abu Dhabi Police, who strongly reminds all motorists to concentrate fully and avoid getting distracted while driving on the road. 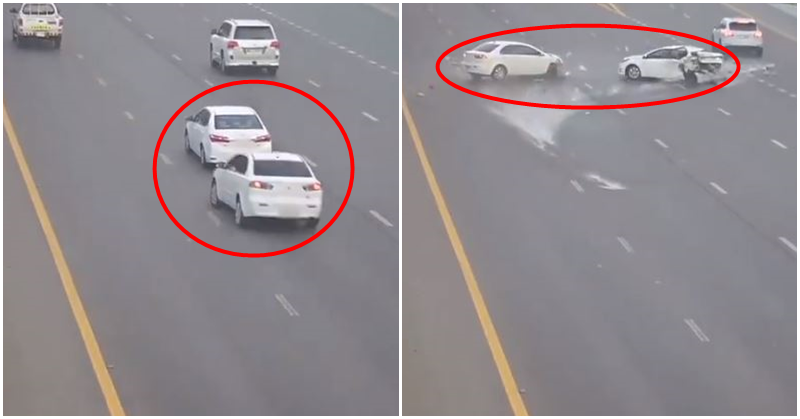 Screenshots of video shared by Abu Dhabi Police on Facebook

In their social media post, Abu Dhabi police warned motorists against lack of focus, using mobile phones, putting on make-up, taking pictures, eating, and drinking while driving — as such distractions could lead to fatal consequences on the road.

The video shows a car on the left slowing down — but without turning on hazard lamps or even attempting to change to a slower lane. This indicates that the driver had been distracted.

The car behind fails to take evasive action in time, thus rear-ending and colliding with the first car. Both vehicles spin out of control, right in the middle of the road. Both cars are badly damaged, although thankfully, no other vehicle got involved in the collision.

According to Abu Dhabi Police, motorists who get distracted while driving on the road could face a penalty of AED 800 fine and four traffic points.

Here is the video of the incident, as shared by Abu Dhabi Police on their Facebook page:

ALSO READ: What You Need to Know about the New Electronic Toll System in Abu Dhabi

Let this video be a reminder for all of us to drive carefully and avoid unnecessary distractions while on the road. Safety — our own as well as our passengers’ — should be our priority at all times. Check out this list of traffic violations and fines in Abu Dhabi, for your reference.

Next post: 55 AED Entry to Yas Waterworld for Kabayan Beach Fiesta on 4 October 2019!

Previous post: 8 Things to Do in Yas Island, Abu Dhabi