To all adrenaline junkies, Ferrari World Abu Dhabi has officially launched the “Turbo Track” rollercoaster which is the theme park’s new rollercoaster. This new ride will put you in the front seat of a Ferrari Test Driver as you experience a thrilling ride combined with a vertical climb and a zero gravity fall.

The Turbo Track was launched on the 29th if March in a high-profile, inaugural event attended by Mohamed Khalifa Al Mubarak, Chairman of Miral, Mohamed Abdalla Al Zaabi, CEO of Miral and Luca Fuso, Ferrari’s Chief Brand Officer, along with a host of dignitaries and distinguished guests. 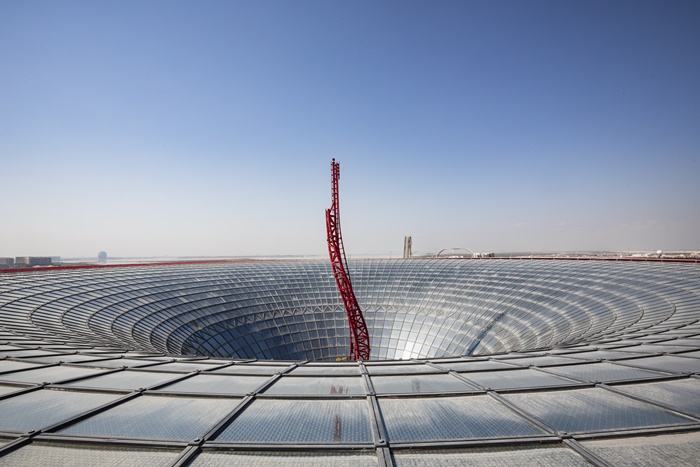 “Today, we are celebrating the exceptional story of how a world-class rollercoaster came to be. We are extremely humbled by the passionate drive that continues to fuel the minds and hearts of our team at Ferrari World Abu Dhabi and those who diligently worked behind the scenes to bring this new ride to life,” said Jesse Vargas, General Manager, Ferrari World Abu Dhabi.

Ferrari World had to make some changes to their building in order to accommodate the construction of the rollercoaster. Guests will be launched from 102 km/h through a funnel made of glass, and you then be propelled vertically through the red roof and the highest point on Yas Island at 64 m. After reaching the highest point, the guests will then be plummetted back down in a zero-gravity fall.

This new rollercoaster adds to Ferrari World’s profile which now has over 37 rides and attractions to entice residents and tourists alike.

Below is a video of the Turbo Track rollercoaster to give you a preview of what to expect from this amazing ride.