On its opening day last February 8, Jollibee Al Falah was flocked by thousands of Filipinos living and working in Abu Dhabi with the first customer lining up as early as 3:00am. More than one month after its opening, the jolly store continues to receive patrons from all over the city who can’t get enough of their Jollibee favorites such as the famous crispylicious and juicylicious Chickenjoy, langhap sarap Yum! Burger, and the sweet-style Jolly Spaghetti.

While Jollibee, the flagship brand of the largest Asian restaurant company, Jollibee Foods Corporation, is easily the go-to fast food chain of Filipinos for a simple dine-out or a venue for family celebrations in the Philippines, being in a Jollibee store away from the home country tells a different story. Some of the Filipinos who came to Jollibee Al Falah on its opening day shared their own reasons why the occasion was worth waking up early for and lining up for long hours. 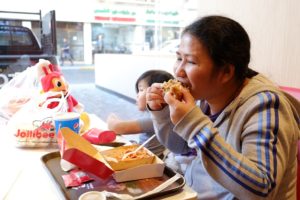 Patricia Mae Ramos happily ate her favorite Chickenjoy and Jolly Spaghetti after being in line as early as 3:00am during the opening of Jollibee Al Falah.

Patricia Mae Ramos had a collection of rare Jollibee collectible dolls when she was still in the Philippines, which includes a complete set of Jollibee stuffed toys and their national dresses. Having been in Abu Dhabi for six years now, her uncontained excitement led her to line up as early as 3:00am to be the first among the 200 people in line to receive an exclusive Jollibee best friend doll. 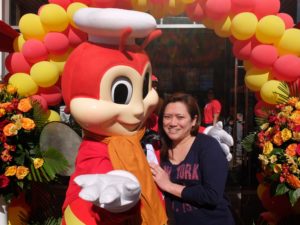 Jane Diaz-Marbella was happy to relive her fond memories with Jollibee back in the Philippines at the grand opening of Jollibee Al Falah on February 8.

Jane, proud to be ‘batang-Jollibee’

Meanwhile, Jane Diaz-Marbella has been working as a Cinema Manager in Abu Dhabi for 16 years now. She fondly recalled how her parents used to bring her to Jollibee when she was still a kid and how she plans to ingrain the same thing in her children’s memories.

Salve, ‘at home’ in Jollibee 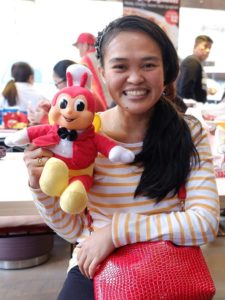 Ma. Salvacion Araneta-Ustare was so giddy to be at Jollibee Al Falah’s grand opening, which she described as a familiar feeling of home.

Ma. Salvacion Araneta-Ustare has only been in Abu Dhabi for two years since she joined her husband who found a job in the city. She admitted that feeling homesick has always been a challenge for her but now that Jollibee has arrived in her neighborhood, it has become a lot better.

UAE is home to one of the largest Overseas Filipino populations in the Gulf Region. In its capital city, the Emirate of Abu Dhabi, many Filipinos continue to endure being away from their families for the sake of giving them a shot at a better life back home. Now that Jollibee has opened a new store in the city, these Filipinos were more than ecstatic to be finally ‘closer to home’.

For Jane, “When you say Jollibee kasi, it’s part of the Filipino culture already.”

The mission of Jollibee has always been to serve great tasting food and to spread the joy of eating to everyone. Anchored on this mission, Jollibee brings a Taste of Home to Filipinos wherever they are in the world. With its aggressive international expansion plans in place, it hopes to bring more and more Filipinos closer to home through the great tasting food and service that it has always been known for.

Filipinos living and working in Abu Dhabi trooped in groups to the Jollibee Al Falah store on its opening day to enjoy together their favorite Jollibee dishes from back home.